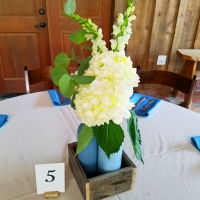 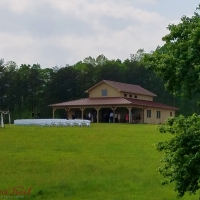 Hot day today, but this group of 160 made the most of it with an outdoor ceremony followed by a reception under the covered area in the venue.  Above and Beyond Catering worked all weekend long and provided food for both Friday and Saturday night, and Kelsey McEntee helped coordinate the wedding both Friday and Saturday night.  For Friday night, the groom had requested a long table for the rehearsal dinner, so we set up 6 rectangular tables end to end in the indoor area for a large family style dinner.  This way, they were able to go ahead and decorate the covered area for Saturday on Friday night.  With the new patio enclosures, they were able to go ahead and put on linens as well as centerpieces, without fear of them being blown off the table.  Taylored blooms came in early on Saturday and assembled the flowers for the wedding and reception, after the bride had provided the vases for the reception tables.  We provided stand up microphones for Michael Root and his classical guitar as well as the officiant, Ben McDaniel, during the ceremony.  After the ceremony, guests continued their drive on down to the venue, while we set up a shuttle ride down to the reception for those in need, in addition to a hay ride for the wedding party.  We then took the bride and groom and their photographer down to the covered bridge for some pictures.  During cocktail hour, we helped display their slide show in the covered area and in the indoor area.  During the reception, Chad Sain provided fun music until late in the evening for the guests as the night cooled off.  All four large fans were out for the reception.