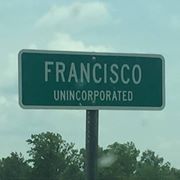 I’ll bet your pronouncing it wrong.  When my wife and I first moved to the area, we pronounced it wrong as well.  It’s actually pronounced FRAN cis co, and it is named after a general store previously in the area that was owned by the Francis family and was called the Francis Company, or Francis Co.  Also, there are many Collinses in the area as well, so Wikipedia says it may also be a combination of the two family names, but I haven’t heard this version around here yet.  It’s right down the street from us, and we are both located in NW Stokes County.

In any case, it is a town that has fallen on hard times.  A recent school closure has taken out the main community hub here.  No worries, though, there is a wonderful group of people that have lived in the area for years that are banding together to give the town a new identity.  They’ve formed a non-profit called the Our Communites of NW Stokes Foundation, and you can check out their facebook page at Our Communities of NW Stokes.

The goal is to be able to raise enough money to show the county that they can support the school building themselves.  Then, hopefully they would be able to repurpose the school to suit their evolving needs for interests such as performing arts, education, history, daycare, health, economic development, etc.  I’ve been lucky to be a part of this, and I think it would be great for our community if we are successful.

Saturday, October 1st they are having a Farmfest to help rasise money for the cause.  Also, on October 15th there is a haunted hayride nearby.  So, if you’re looking for something fun to do, or if you want to be a part of something that is bigger than just a one day event, come by and take a look.  Here’s the catchy flyer detailing some of the days activities: